In the following tabs, you will find the diary (which starts on page 5) as well as the additional documents. The diary is accompanied by a transcription of the text as is, a standardized French version of the text, and an English transcription. For more information, check “The Translation Project” tab.

In 2020 I added another component to the project. I created a digital map using the tool StoryMapJS from Knightlab. This map is based on Albert’s diary, in which he recollected his war experience. Each location connects to a specific page in the diary and for each entry, I provide short explanations in both French and English. The map is available on the “WWI Diary of Albert Huet: the Map” tab.

Finally, in the tab “Albert in Fiction” you can find the link to my father’s book, Dieu est mort, that he wrote during confinement between March and June 2020. This books is based on Albert’s WWI experience. It’s based on things Albert used to tell my dad, as well as the diary.

September 2020: I have published an article entitled “The World War I Diary of Albert Huet.” in SOURCE: The Magazine of the University of Florida George A. Smathers Libraries.

*Please note that Albert Huet wrote this diary after World War I ended. However, we do not know exactly when he did so, though we suspect it was in the 1950’s. Nobody knew about the diary until my aunt found it in the garage in 2015.

*A biography and summary of Albert’s account of the war can now be found on the website of the Collectif de Recherche International et de Débat sur la Guerre de 1914-1918. Thank you Rémy Cazals.

*Albert’s diary is now listed in the Diary Index, a website designed to serve as a resource for students, scholars, and general readers who are interested in diaries. Thank you Dr. Desirée Henderson.

Albert Huet was born on December 14, 1897 in a small village in Normandy, France. In 1916, he turned 18 and was drafted into mandatory military service in the French Army. At the time, the First World War had already been raging for two years. After a brief period of training, Albert was deployed to the Ardennes front, a dangerous combat zone (see the Chemin des Dames). He would serve in the trenches until 1918, when he was severely injured in a gas attack. While recovering, the Armistice was declared in November 1918 – but not before most of his regiment was massacred by a German assault.

After the war, Albert married the sister of an army friend and moved to Argenteuil – then a rural suburb of Paris. In Argenteuil, he found work with a railroad company. In 1955, he was diagnosed with larynx cancer: a result of the smoking habit he had picked up during military service. Over the following months, he received an emergency tracheotomy, had his larynx and vocal chords removed, and was treated with radium. Miraculously, he survived both the cancer and his treatment, boasting that if “the Krauts didn’t get me, then cancer won’t either.” He died twenty years later on November 23, 1977.

Because Albert was born in rural France at the turn of the century, his educational opportunities were minimal. As a result, his grammar and spelling are occasionally irregular. The text accompanying his diary therefore contains both a direct transcription of his words as well as a revised transcription in standardized French. 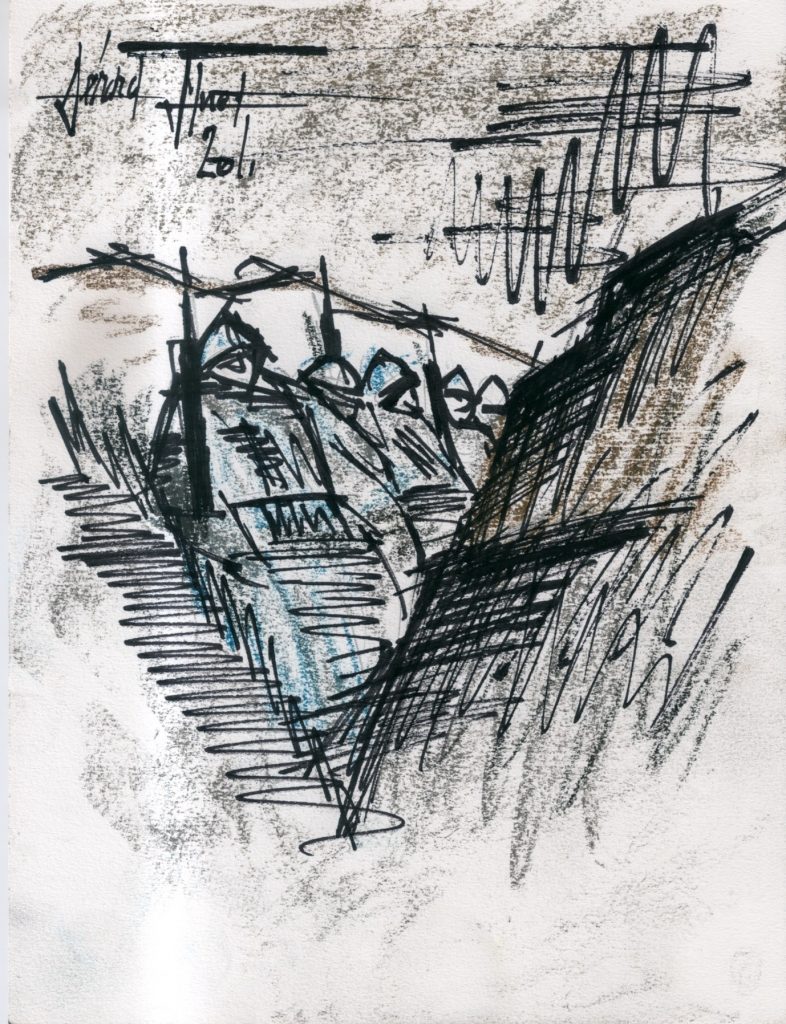